To Register for an Online Event Featured Here:

Please see the HOW TO BOOK information under each Event description.

The Cinema Theatre Association organises visits to cinemas and theatres, past and present, across the UK and overseas. Lectures and other events feature in our programme of activities too.

There are in-person events which are usually for members only, and also online events which can be enjoyed by anyone, although members pay less for their tickets - so why not join us to enjoy all the benefits of CTA membership?

Full details of events are provided in the bi-monthly Bulletin

ALL LISTED EVENTS ARE ONLINE ONLY UNLESS SPECIFIED OTHERWISE

For further COVID related information and how the CTA is responding, please see the information panel at the bottom of this page.

The New Season continues with

A Golden Mile of Cinemas

The Inner London district of Dalston boasts a Golden Mile of cinemas –but is it the birthplace of UK cinema-going? Andrew’s fascinating talk will set the scene and then take us back to visit the lost cinemas of Dalston and Stoke Newington, noting some of the landmark firsts that they claimed, exploring their bold and contentious statements.Was Amhurst Hall actually the first purpose-built cinema in the UK?

The talk will include an in-depth look into the early life of one of Britain’s favourite repertory cinemas – the Rio Dalston – a contender for the oldest continuously operating cinema in the UK.Focusing on its pre-Rio life to 1936 as the Kingsland Empire, one of the grandest early silent cinemas, we will take a virtual trip around the ornate 1915 George Coles building and be the first to see new exclusively filmed footage from within the ghostly surviving remains of the earlier auditorium, unseen by the public for 85 years. We’ll also hear recently discovered descriptions of its lavish and unusual interior, before its total remodelling by FE Bromige in 1937 (which was covered in our earlier Bromige talk).

Our presenter Andrew Woodyatt is a long-time CTA member involved with the management of the Rio Cinema. His A level art project on the cinemas of Derby in 1982 led to a 30+ year career in exhibition, distribution and production, also managing the PR and marketing for the Rio , the Phoenix East Finchley and the newly opened Act One in Acton. He also lectures in film marketing at Goldsmiths University.

After the main event has finished stay on as you are invited to join us in the lively and popular ‘pub chat’ session, discussing cinema-related topics of your choosing that you would like to share with others. If you prefer to listen, then feel free to just enjoy listening! You are welcome in any situation. You don’t have to stay to the end and you can leave whenever other activities call. This is an open-ended meeting, closing when either the conversation or the virtual ‘pub bar’ runs dry!

CTA TALKS AND PRESENTATIONS ARE OPEN TO EVERYONE - MEMBERS AND NON-MEMBERS ALIKE.

TICKETS ARE £3 FOR CTA MEMBERS AND £5 FOR OTHERS

IMPORTANT: PLEASE ENSURE THAT YOU COMPLETE THE REGISTRATION LINK THAT ACCOMPANIES YOUR TICKETSOURCE CONFIRMATION.

PLEASE NOTE: BOOKING CLOSES 30 MINUTES BEFORE THE START TIME OF THE TALK 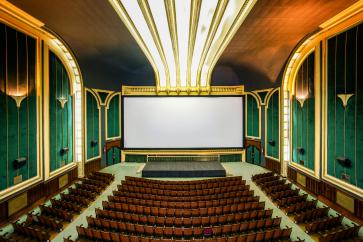 THE LAST CINEMAS OF MOROCCO

Mention Morocco to any filmgoer and they immediately think of Casablanca. Ever-striving to bring you variety, the CTA now invites you to explore the cinemas of Morocco.

Our guide is Francois Beaurain, who has recently published a book on the subject. Francois will be presenting his unique photographic record of the predominantly Art Deco cinemas of Morocco that have managed to survive in its most popular towns.

Francois says: “Morocco holds an incredible heritage of movie theatres built between 1913 and now. Such a diversity of movie theatres in such a shape is rare. Unlike Europe, where the vintage movie theatres have been turned into multiplexes, the Kingdom’s cinemas have kept their architecture and their identity. Unfortunately, this heritage is in danger. Many movie theatres are closing down and many of them have already been destroyed. The arrival of TV, VHS and finally internet has caused massive public disaffection. Out of 240 theatres in operation in the 1980s, only twenty were still in activity in 2021. Because of the pandemic and the lockdown, the current situation is now catastrophic”.

His book "Cinémas du Maroc" (Cinemas of Morocco) is a photo and history book of this previously overlooked heritage and it will undoubtedly raise public awareness. An English-language version of his book is expected for 2022.

After the main event has finished stay on as you are invited to join us in the lively and popular ‘pub chat’ session, discussing cinema-related topics of your choosing that you would like to share with others. If you prefer to listen, then feel free to just enjoy listening! You are welcome in any situation. You don’t have to stay to the end and you can leave whenever other activities call. This is an open-ended meeting, closing when either the conversation or the virtual ‘pub bar’ runs dry!

CTA TALKS AND PRESENTATIONS ARE OPEN TO EVERYONE - MEMBERS AND NON-MEMBERS ALIKE.

IMPORTANT: PLEASE ENSURE THAT YOU COMPLETE THE REGISTRATION LINK THAT ACCOMPANIES YOUR TICKETSOURCE CONFIRMATION.

PLEASE NOTE: BOOKING CLOSES 30 MINUTES BEFORE THE START TIME OF THE TALK

Visits and Events - a COVID-19 update

The COVID-19 pandemic and government restrictions has prevented the Cinema Theatre Association arranging its usual schedule of group visits, talks and meetings, etc. To ensure that our members can still have the opportunity to come together, the CTA Events team has worked hard to create a new Digital team which now brings you online “virtual” talks using the latest ZOOM meeting technology.

These virtual talks have proved increasingly popular since starting in December 2020. Held on the first Saturday of every month at 5.30pm, you can enjoy a cinema-related presentation all from the comfort of your own home. As well as attracting those who are able to attend our in-person events, using this new online technology allows many people to join in who previously would not have been able to participate- whether because of time, location, ability to travel or otherwise.

All you need to enjoy the online events is an email address and an internet connection, and a device to watch on- whether that’s a PC, tablet, laptop or smartphone.

The programmes so far have included cinema pioneers, amateur filmmakers, projectionists, cinema preservation, cinema architecture styles including Atmospherics and Egyptian and more, including visits to America, India and around the world! Not bad considering we’ve only been going for a few months!

Embracing this new technology has also allowed us to build relationships with international colleagues, for example the Los Angeles Historic Theatre Foundation, and we hope to increase this in time. We are all united in the desire to preserve our beloved cinema buildings, and collaboration reaps benefits for all parties.

The online events have also been increasing access to our work from those who are interested but not yet members. Thus, online talks available to global audiences are a great way to spread the word and encourage more people to consider joining the CTA.

As we gradually return to enjoying face-to-face meetings and in-person visits, the CTA will benefit from creating a range of participation offers to widen our audience, so that the CTA can raise its voice through raising its membership.